The Disclosures to Play Kids in the Rotunda

The Disclosures – the Madison-based “musicians with a mission” – are set to play three free performances at the Overture Center’s Kids in the Rotunda series on April 29th!

Get ready to sing along with The Disclosures, whose humorous songs blend lessons on basic money management with stories of pirates, piggy banks, toys and more. Christopher and Chad combine their passion for music and years of experience working with youth financial education to perform songs from their album, “The Secret to Being Rich”. Learning about money has never been this fun!

Visit the Overture Center’s website for more information about the venue, show times and more. And here’s a video about what to expect when you attend a Kids in the Rotunda show.

PSSST…as a bonus, the first 600 kids in attendance will receive a special surprise from our friends at Summit Credit Union.

The Disclosures on Hiatus – An Open Letter to Our Fans

Four years ago, we set out to make the world’s first album featuring songs about credit union history and philosophy. We made a “dream big” list of crazy venues we’d like to play, audiences we’d like to entertain and those “wouldn’t it be cool if…” ideas.

We set lofty goals and were surprised to find that two years later, we had accomplished everything we wanted to and then some. So we sat down and came up with another “dream big” list, this time setting our sights on making a financial education album for kids unlike anything else in existence. Looking back at our list now, we realize that we’ve again achieved everything we initially set out to do.

Over the past four years, we’ve played our music at almost every type of venue open to a credit union band with audiences made up of thousands upon thousands of credit union employees, members, and kids at credit union chapters, staff trainings, league annual meetings, national conferences (including crazy venues like Disney World and Estes Park), school assemblies across the country, and many more events we felt fortunate to be a part of.

The Disclosures have been interviewed for newspapers and TV, featured on websites such as the Huffington Post, and our YouTube music videos have earned over forty thousand views. We’ve busked on streets, damaged instruments and soundboards, spent countless hours driving or being delayed in airports, and used many vacation days just to play our music and hopefully inspire others to learn more about credit unions and personal finance.

We feel extremely fortunate to have all of these experiences and meet so many amazing people along the way, and there’s only one question we ask ourselves now: “what’s left for a credit union rock band to do in this world?”

The answer is: take a hiatus. This is not a break-up as we want to leave the door open for whatever the future brings in terms of opportunities and our own ideas. We’re also still close friends and you won’t find any scandals behind this band “break up” (sorry TMZ!). We both have plenty of dreams and creativity left and are now just making new goals and plans that don’t tie into “The Disclosures” model.

The Disclosures want to thank everyone over the years who have supported our efforts and invited us to perform. There are simply too many people to individually thank, but know that we could not have accomplished our dreams without you. Performing and creating our songs has brought us much joy, and we hope you feel the same.

Perhaps the last item on our “dream big” list is that we hope people will continue to stumble on our music in future years and ask: “wait, what the heck is this?”. Along with being slightly unusual, our music has always been intended to inspire education, humor and passion for what we believe in. Whether it’s a song about the cooperative principles or a pirate with irresponsible borrowing habits, we hope that always shines through.

It’s fitting that our last performance was for the Filene Research Institute’s 25th anniversary party, as Ed Filene has been a constant source of inspiration for us both. We have done our best to “keep purpose constant”, as Ed once said, and will continue to do so in whatever we do. 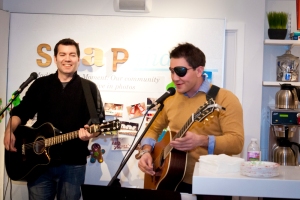 The Disclosures hosted their Record Release Party on December 20 at DreamBank in Madison. Snacks were had, laughs were shared and Christopher and Chad capped off the event by playing an acoustic set featuring a few new songs from their new album, The Secret to Being Rich, as well as some festive cover songs to celebrate the holiday season. The setlist included:

– Save!
– Blue Christmas
– Kidd Silver, The Savviest Pirate to Ever Sail the Seven Seas
– Christmastime is Here
– Won’t You Be My Money Buddy?
– Mele Kalikimaka
– Thank My Piggy Bank
– Rockin’ Around the Christmas Tree

More pictures from the event can be viewed on our Facebook page.

Thanks to friends and family who traversed the snowy conditions and took a break from the holiday bustle to celebrate with The Disclosures at their record release party last week. And a big thank you to DreamBank and their great staff for hosting the party. 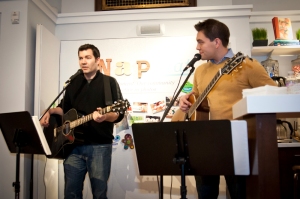