We had such a great time playing in Washington, DC last week at a few events related to the Credit Union National Association (CUNA) Governmental Affairs Conference (GAC). At both shows, we talked about our unique history as a “credit union” band and played a few songs. We also decided at the last minute to unveil a new song (“Thank My Piggy Bank”) from our forthcoming youth financial education album we are currently recording and the response was incredible! It makes us really excited at the new direction we are focused on. We can’t wait to release the album later this year! 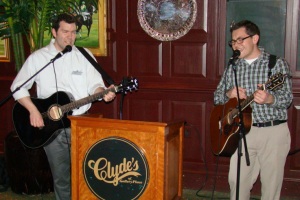 The first show we played was at Clyde’s of Gallery Place for the Tom Connors Memorial Luncheon. This is a special event for alumni of the Credit Union Development Education (DE) Training Program and we were humbled to be on the agenda for the event. The band met at DE Training in 2009 and is a major reason why we’ve chosen (and been inspired) to write and perform songs about financial literacy, cooperatives and credit unions.

We also played at the Friends of the Foundation reception, a private reception held prior to the National Credit Union Foundation Dinner Presenting the Herb Wegner Memorial Awards. As you can see by the pictures, it was a formal event and we were so honored to be asked to perform and tell our story!

This entry was posted on March 8, 2013 by Christopher. It was filed under Music News .