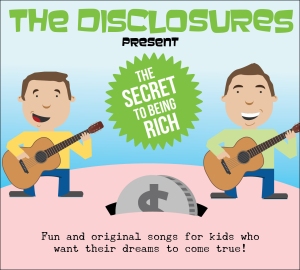 We are pleased to release the first glimpse of our album art for “The Secret to Being Rich” slated to release in December, 2013! The forthcoming kids album uses music and humor to introduce lessons about money, savings and responsible spending.

We owe a huge thanks to Lesley Clark from Sissybird Design for putting together this wonderful front cover. She’s working on all of the album art for us and every bit of it looks amazing. Thanks Lesley!

What’s the album going to sound like? In case you missed it, on April 2nd, we released the song and video for “Thank My Piggy Bank”, the first single from the album. Stay tuned for the tracklisting and more details on our album between now and December. We can’t wait to share it with you!

This entry was posted on October 30, 2013 by Christopher. It was filed under Music News .