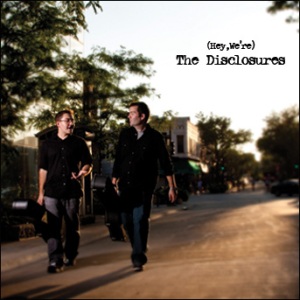 The album, titled “(Hey, We’re) The Disclosures”, was released today and is the band’s first attempt at combining their musical abilities with their passion for democratically-controlled, not-for-profit credit unions.

“Credit unions have long been thought of as a best-kept secret in the financial industry,” said Disclosure band member Christopher Morris. “We wanted to spread that ‘secret’ in our own unique way and help people gain a better understanding of what credit unions are and how they differ from other institutions.”

The all-acoustic album is comprised of seven songs written and recorded by Morris and Chad Helminak, who both work in the credit union movement, but completed their songwriting project outside of normal business hours.

“We focused on making quality rock songs first and foremost, while still delivering on that message of thrift and cooperativeness,” noted Helminak. “We had a blast writing and recording our songs and hope that comes through on our album and live performances.”

In addition to the album, The Disclosures have scheduled a number of upcoming performances at credit union events, including an education break-out sessions on credit union history and philosophy – infused, of course, with their original songs.

The album is currently available for download on major digital music stores such as iTunes, Amazon.com and others. Physical copies of the CD are available online through the The Disclosures’ website, as well as speaker and live performance information.

The concept for the album was borne out of the success of their first credit union-themed song, “Movin’ on with my Money,” recorded for the Young & Free “Looking like a fool with your money in a bank” music video contest. Their music video came in third place in the contest, receiving thousands of views on YouTube and attention from almost every major credit union publication including the Huffington Post’s “Move Your Money” campaign. In October of 2010, the band released their first single from the album, “The Ballad of Friedrich Raiffeisen,” for International Credit Union Day.

About the band: The Disclosures are an all-acoustic, “thrift-rock” music duo consisting of Chad Helminak and Christopher Morris. They are young and passionate credit union advocates who, by day, work at jobs within the credit union movement, but when the five o’clock whistle blows, they use their music and songwriting talents to write original songs about credit union history, philosophy and advocacy.

Their music has been featured on the websites of credit unions, trade groups and consumer awareness sites, such as the Huffington Post’s “Move Your Money” website. Their first album of original credit union songs, “(Hey, We’re) The Disclosures,” was released in March of 2011.

This entry was posted on March 8, 2011 by Christopher. It was filed under Music News .